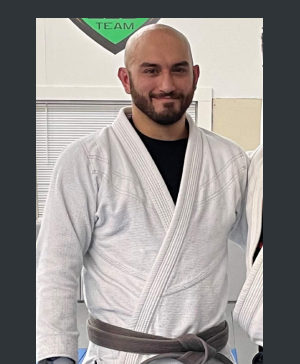 Gabriel Santiago has been training in martial arts since 2014. Having originally walked into Everilton “Soneca” Silva’s gym to take a boxing class, he opted to stay for a Brazilian Jiu-Jitsu class and hasn’t stopped since. With a background in breakdance, the movements of the art came naturally and he was immediately hooked. As his passion and technique progressed, he was asked to begin assisting with beginner children and adult level classes as a white belt. He began instructing the same classes independently as a blue belt the following year. Now a brown belt with seven years as an instructor, Coach Gabriel has had the rare opportunity to grow as a student and teacher simultaneously. Learning is limitless and it is his hope to create a space where students can build confidence and reinforced with positive encouragement.